I. Laws and Regulations

On July 16, 2014, the Supreme People’s Court of China (SPC) published a draft of judicial interpretation regarding patent disputes: the Decision on Amendments to Several Provisions of the Supreme People’s Court of China on Issues.Concerning the Application of Law in the Trial of Patent Dispute Cases (Draft for Public Comments). The draft of the amendments was open for public comments during a one‐month period until August 15, 2014.

The Draft for Public Comments involves amendments to 9 provisions, among which 2 concern patent evaluation reports, 1 concerns patent protection scope, 4 concern compensation for patent infringement, and others are adaptive amendments to correspond to the current Patent Law and its Implementing Regulations.

Significantly, the People’s Court may ask the plaintiff to submit the Patent Search Report or Evaluation Report, and the failure to do so without good reason may result in a cessation of the litigation, which means the court may suspend the case. This is an adaptive amendment to correspond to the amendment of the PRC Patent Law in 2009 regarding the Patent Evaluation Report.

This means the function of the Patent Evaluation Report becomes more important. The major motivation for this requirement comes from the fact that the SIPO does NOT conduct substantial examinations in design and utility model applications. The Search Report and Patent Evaluation Report are a substantial examination conducted after the patent is granted, and will give the court a sense of the validity of the patent.

The definition of “infringement benefit” in infringement compensation is also similarly defined: the benefit acquired by the infringer through infringement may be calculated by multiplying the total sales volume of the infringed patented product in the market with the reasonable profit of each product infringed.

5.The method for calculating the “reasonable expense incurred for stopping the infringement act” is changed from “calculation within the scope of compensation” into “calculation separately.”

1.The highlight of the Draft for Public Comments lies in the calculation of damages for infringement, which is summarized as follows: 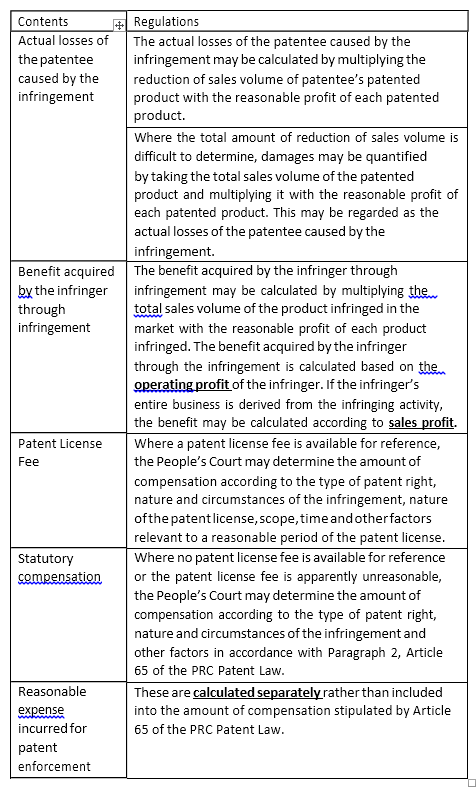 The Draft for Public Comments may be regarded as a move to affirm the “all‐elements” principle. This move shows that there is a consensus regarding the “all‐elements” principle in the court, which means that all the technical features in the claims will be considered.   In the past, there have been cases wherein one component defined in the independent claim have not been considered in the infringement litigation because the court believed that that component was superfluous as it related to the technical problem. After this amendment, the “principle of superfluousness”represented by the description of “essential technical feature” in all existing judicial interpretations will become a thing of the past.

This development also reflects the importance of reviewing claims from all aspects. Each technical feature in the claims will be subject to comparison in an infringement analysis. There will no longer be any difference between essential and non‐essential technical features when determining infringement of a claim.

3. Importance of the Patent Evaluation Report

In order to obtain a positive Patent Evaluation Report, the patentee of a utility model or design patent has to avoid any prior art as much as possible. This move will improve the quality of any granted utility model and design patents and reduce the incidence of “junk patents.”

In the third office action, the examiner raises formality issues such as a lack of antecedent basis and indefinite descriptions. After reviewing our submissions, the examiner allowed the application.

Patentable subject matter according to Article 2 of the PRC Patent Law has becoming a popular issue frequently raised by examiners at SIPO. SIPO has always been conservative in this regard, which has resulted in an increasing number of applications being rejected. On the issue of patentable subject matter, the most common practice for dealing with the issue is making formality amendments. For example, a claim related to a method for the treatment of diseases may be amended into a claim related to pharmaceutical use.

For claims related to computer software, especially claims related to methods for commercial use, although these claims may be amended to protect systems related to computer software and the like, these claims cannot pass though the examination under Article 2 of the PRC Patent Law. Therefore, after receiving an office action related to the non‐statutory issue, a patent attorney must thoroughly study the technical solution described in the application to identify technical problems underlying its commercial use.

The patent attorney must then explain to the examiner the technical problem the application might solve, the technical means it utilizes and the technical effect it might achieve. The goal is to prove that the solution utilizes natural rules and corresponds to technical solutions governed by the PRC Patent law.